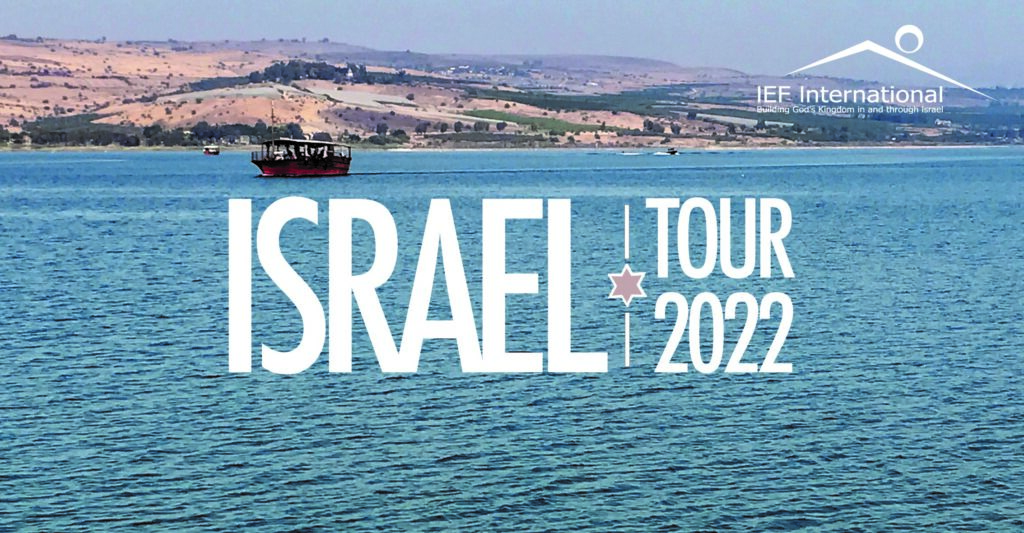 The 2022 IEF ISRAEL TOUR will be led by John Sode-Woodhead. John is a biblical archaeologist and licensed tour guide who has spent much of his life in Israel. IEF supports John in his ministry in Israel amongst both Jews and Arabs. Due to the combined experience of John and Immanuel Tours, they will be able to bring to life the sites you visit in a new and exciting way.

It is our hope that at the end of your visit to the land you will have a greater understanding of the historic truth of God’s word. Places you had previously only known as words on a page, you will now be able to visualize, bringing a fresh awareness of God’s truth.

Our itinerary is below:

Saturday 19th of November is the day of rest for Israelis, so there is no public transport. But we make sure you get safely from Ben Gurion airport (Tel Aviv) to the Colony hotel in the city of Haifa on the Mediterranean coast.

On Sunday 20th of November, your tour will officially begin. After breakfast, you will be taken to the ruins of Caesarea Maritima by the sea, which is situated between Haifa and Tel- Aviv. During the time of Jesus, it was the site of the Roman capital of the province of Judea and the seat of its Governor, Pontius Pilate. Paul spent two years in prison here before being sent to Rome. (Acts 24:27)

You will then be taken to the “Plain of Armageddon” to King Ahab’s city of Jezreel (I Kings 21 & II Kings 9) where John led extensive excavations. Then the coach will take us to the Roman city of Beth Shean, one of the Decapolis. From there we will go up Mt. Tabor, the traditional site of Transfiguration. Your first day will then close in Nazareth, a town in the hill country of Galilee where Jesus grew to manhood (Matt. 2:23) at the Golden Crown Hotel.

Monday 21st of November you will begin your day in ‘Nazareth Village’, a historical re-enactment site where you will be given a tour. We will visit Mt. Precipice, just outside Nazareth overlooking the Jezreel Valley. Then onto Zippori. You will then visit Mt. Arbel with a breath-taking view over the lake and ending your day with a sail on the Sea of Galilee (Lake Kinneret). We will sleep two nights at the holiday resort on the lake Maagan Eden.

On Tuesday 22nd of November you will begin your day with a visit to the Hula Valley. Journey over to Ramot Naphtali and on towards Misgave. From there we will travel to the Dado lookout in Metula. Then from Tel Dan which was the northernmost town in biblical Israel (hence the saying “from Dan to Beersheba”) we will ascend Mt Hermon. We will next visit Capernaum where Peter lived, and Jesus taught repeatedly and visit Magdala where you will find the oldest excavated synagogue in Galilee.

Wednesday 23rd of November we will head down the Jordan Valley visiting the Qasr el-Yahud baptismal site, and Qumran associated with the Dead Sea Scrolls. From there we drive to the mountain fortress of Masada. This was the site of the last Jewish resistance against the Romans in 73AD. Ascent and descent will be by cable car as the climb to the top can take an hour and is quite arduous.
Having toured the ancient fortress site, you will be taken to the Biankini Resort hotel by the Dead Sea. Here you stay overnight and have the opportunity to bathe in the waters of the Dead Sea which is bordered by Israel on the west and Jordan on the east. It is almost impossible to swim in the Dead Sea because of the high salt content of the water, but you can float!

Thursday 24th November, you will be driven to the “City of God“, Jerusalem, and take a first glimpse from the top of Mt. of Olives, one of the heights surrounding the Holy City. We will tour the Old City and finish our day visiting the Garden Tomb site where we will share Communion.

We will start Friday 25th November with a visit to Yad Vashem, the Holocaust History Museum, a memorial site. The name “Yad Vashem” is taken from a verse in Isaiah 56:5. In the afternoon, you will be free. With a choice of either wandering round the Old City of Jerusalem or visiting Bethlehem.

Saturday 28th of November, our final day we will be visiting the southern desert of Israel, the Negev including Avdat, Sde-Boqer, and especially the biblical town of Be’er Sheba. You will end the day in Tel Aviv with a visit to ancient Jaffa.

You will then return home on Sunday 28th November.

For more details and further information about how you can secure your place on the tour, click below to read more about registration and paying your deposit.

Got questions? Visit our FAQ’s page.